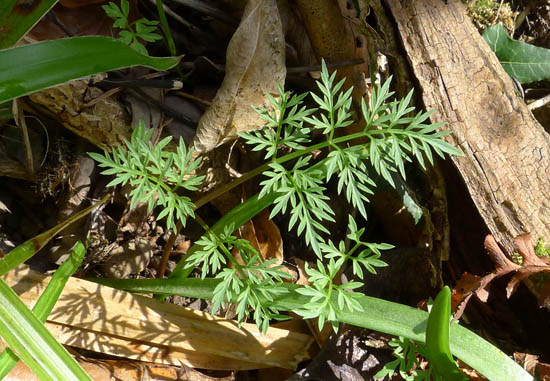 To the uninitiated, the pignut, Conopodium majus, can be hard to spot, particularly in the spring. But once you’ve been shown and know in which places to look, they are surprisingly common. Leaves appear in the spring, then the flowering heads in late spring and into summer. The plant flowers in late spring/early summer and once the flowering head dies back, the pignut leaves no above-ground sign of its presence. It is the underground part of the plant we are most interested in – the root or tuber – so the first opportunity you’ll have to gather them is in the early spring when you see the leaves appearing.

Pignuts are one of the more palatable wild foods. The tuber can be eaten raw and is very tasty. In flavour and consistency pignuts are something like celery heart crossed with raw hazelnut or sweet chestnut and sometimes have a spicy aftertaste of the sort you get from radishes or watercress. Pignuts can also be added to soups and stews to increase carbohydrate content. There are records of pignuts – along with silverweed roots – being relied upon as caloric staples at times in the past. Therefore these diminutive roots could provide an important survival food even now. But even if you are not interested in survival skills, they are a great wild food for which to forage.

The pignut is in the carrot family, or apiaceae, and the leaves do bear some resemblance to carrot, at least in structure. As a general rule people should be wary of this family of plants as it contains some very poisonous plants such as Hemlock, Conium maculatum, and Hemlock Water Dropwort, Oenanthe crocata. The pignut is relatively easy to recognise from its above-ground or aerial parts, partly due to their small size compared to other members of the carrot family. The leaves are finely divided and delicate.

The pignut is common in many parts of Europe and its range extends to North Africa. Pignuts grow in open woods and in well-established (and ungrazed) grassland. In the woods they like to grow in areas that receive a reasonable amount of sunlight. On bright spring days you’ll spot pignut leaves in areas of dappled sunlight, often right beside the trail you are walking along. The plant likes well-drained soil. You won’t find it growing in damp ground.

The most important edible part – the nutritious underground starchy tuber or ‘nut’ – is unlike other members of the family. They are generally roughly spherical in shape and typically the size of a hazelnut but some specimens have been found as large as golf balls. The outer surface of the tuber is a similar maroon colour to a sweet chestnut although will be covered in soil when first removed from the ground. They can be smooth or sometimes a bit bumpy or warty-looking.

Apart from mistaking the aerial parts of the plant for other apiaceae in their early stage of growth, you should also avoid mistaking the underground part of the plant for other roots and tubers. Pignut leaves are often found shoulder-to-shoulder with bluebells, Hyancinthoides non-scripta, and so underground the pignut tuber is found near to the poisonous bluebell’s onion-like bulb. A badger expert once told me that many people observe badgers “eating bluebell bulbs” whereas in fact they are digging up and munching the pignuts which grow alongside. Studies have shown that pignuts constitute up to 5% of the diet of some badger populations. You can also find lesser celandine, Ranunculus ficaria, in the same areas as pignuts and while the roots of these are edible at certain times of the year (but ONLY COOKED), you don’t want to be making this mistake either.

If you keep the leafy shoot of the pignut connected with the tuber then you have a positive identification. Achieving this, however, is quite fiddly. The tuber is typically 10-20cm under ground and the shoot gets thinner and thinner as you get closer to the tuber. It is very easy to break it and detach one from the other. Pulling the nut out of the ground by the shoot is out of the question. Also, the shoot tends to come out of the side of the tuber then bend at right angles to continue its journey upwards and out of the ground. So as you follow the shoot down to the tuber, this makes it harder to identify the tuber itself as it is rarely where you think it might be.

Students on courses I have taught where we have collected pignuts have sometimes commented they were under the impression that collecting pignuts is illegal in the UK. I think this impression is given by some wild food books singling out the harvesting of pignuts as illegal whereas this is only part of the story. The relevant part of the Wildlife and Countryside Act, 1981 applies to all plants, not just pignuts. Unlike picking leaves from a plant, uprooting the plant itself is illegal without landowners permission, even if you are collecting for personal consumption. I would recommend anyone involved or interested in collecting wild foods in the UK to read and understand the BSBI’s Code of Conduct for the Conservation and Enjoyment of Wild Plants which gives a good overview not only of the relvant legislation but also ethical considerations.

To uncover a pignut.
Find a small stick around pencil thickness, cut it to pencil-length and create a point at one end.

Clear the ground of leaves, etc around the pignut stem (don’t damage other plants though). Carefully follow the stem down into the ground by digging beside it with your stick. Don’t be ham-fisted; think lock-picking rather than digging.

As you get deeper, the stem becomes thinner and more easily broken; at this stage, imagine you are defusing a bomb and can’t disturb the wires or, pehaps, a less stressful yet suitably fiddly job. Either the stem will appear to stop (if it bends away from the little hole you’ve dug) or you’ll dig down on top of the nut. Either way you should be able to see where the nut is. Now carefully dig out the nut and recover the whole tuber plus shoot in one piece.

To prepare the pignut for eating, remove the outer skin; just squeeze/scrape it off…

To eat, remove the outer skin; just squeeze/scrape it off. If you do this properly, you don’t need to wash the pignut or employ any other cleaning. You can then just eat it straight away. Or save it for later of course! Happy foraging…

This article is meant only as a guide and is largely a record of my recent forages. It is not a complete treatment of all edible plants that might be available. Nor does it provide a complete treatment of all poisonous plants that may also be present in the habitat where you find the above-mentioned plants. If you want to learn more about plant identification you should invest in some good field guides. The safest way to learn about edible wild plants is for someone who already has the knowledge to show you in person. Any foraging you do on your own is at your own risk.

The most important thing to remember when identifying wild foods is:

IF IN DOUBT, LEAVE IT OUT!

41 thoughts on “Conopodium majus: Pignuts and How to Forage for them”