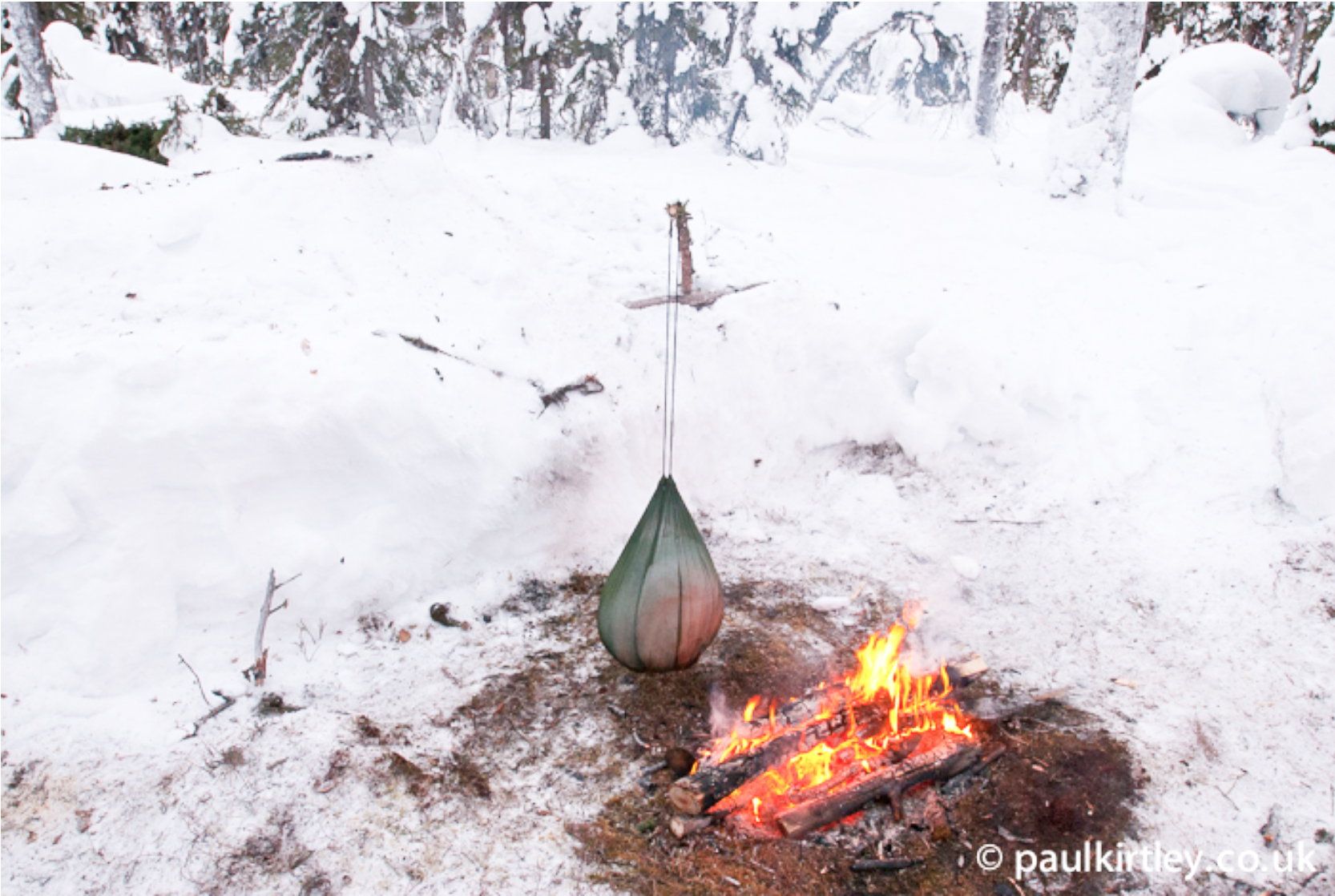 Click on the four arrows bottom right for full screen view. Click on “HD” to stream the 720p version. This may be choppy unless you have a fast connection. Toggle HD off by clicking “HD” again.

Water Generation In A Winter Environment

In the above video I share with you a couple of really effective methods of generating water in a frozen environment.

Because they’re frozen, extreme cold environments are, for all practical intents and purposes, deserts.

[N.B. For the benefit of viewers who have difficulty hearing, the text below is based on a transcription of the video and follows its narrative closely.]

In the video I stand on a lake that’s part of a small river system. Underneath is a source of really good, clean drinking water. You don’t even need to boil it. But in winter conditions it’s sealed by ice. You can’t get at the water. And that ice is 1 metre (3 feet) thick. Unless you’ve got a specialist tool, such as an ice auger or an ice chisel, getting at that water underneath the ice is impossible.

There is plenty of water here, though, in the form of snow, and the key to accessing this is fire. Of course, if you’ve got a metal pot or metal mug, it’s very easy to put snow in them, put them near the fire or over the fire, and obtain water.

What you need for both of these techniques is some sort of receptacle to catch drips that you generate with the fire. If you don’t have anything, then even a polythene bag, a rubber boot, or a plastic boot, anything like that, that you can gather water in for drink in an emergency, could be used. So think laterally. Think about what you’ve got.

The first method I share in the video is known as the Finnish marshmallow. For this technique, you need a stout pole such as from a small spruce tree.

For this technique, you need compacted snow. You might find this on an existing trail through the woods, a snow machine trail, or a dog sled trail, or a trail you’ve created yourself, maybe with your snowshoes. You’ve been backwards and forwards a few times. You’ve compacted it. It’s frozen. That will be good. Dig it up, get a lump of snow, and you’re good to go with that piece of snow.

The tricky bit here is getting the lump of compacted snow onto the stick without breaking the snow. But once you do and get it into position, the heat of the fire will start to melt it. Eventually it’s going to drip. Once it starts dripping, we’ll pop a receptacle underneath to catch the drips.

In the video you can see that it’s important not to have the snow directly over the fire, for two reasons. One is that that water would drip on the fire, and that’s fairly obvious. But also, you don’t want it too close because you’ve got to put something down underneath. And if we’re not using something metal, it’s going to be either wood or plastic. If it’s too close to the fire, it’ll damage it. So you’ve got to strike that happy medium.

To melt the snow you’ve got to get a good radiant heat you can feel with your hand. That’s going to start melting the snow. It won’t start dripping immediately though, because the outside will melt, and that will soak up into the snow. First you need to wait for it to get saturated, and then it will start dripping. That may take a few minutes, maybe even 5 or 10 minutes. But once it starts dripping, it’ll start dripping well.

In the video you can see this progress. After a while it’s not quite started dripping yet, but you can see it’s becoming saturated with water at the bottom of the lump of snow. I hope you can see that on the video. You can see a different colour.

Later you can see it’s started dripping. At this stage I pop a container down underneath.

Now, you might be concerned about scorching, or – if it was plastic – melting, the container. Most of the heat that’s going to do that is going to come horizontally between the base of the fire and the container, so I place a bit of green wood that we chopped off the bottom of our pole to shield the heat. That will help prevent too much direct heat getting to the receptacle.

And you can see, once it starts dripping, it drips out at quite a rate. But it takes a while to get going. I think in this instance, it took over nearly 10 minutes to start doing that. The water basically starts melting, soaks up into the snow. And then once it’s saturated, once the snow at the base is saturated, it’s then got nowhere to go. Gravity pulls it down into your container. Once it does start, however, quite soon you’re going to have a good drink out of that.

The beauty of this method, though, is, while that’s working, I can go off and do other things, build a shelter, set up a tent, whatever I need to do. I’ve got this water generation going. It’s producing water for me while I can do other things. That’s good.

This Finnish Marshmallow, you can see, looks like a marshmallow over the fire.

The second method I share in the video is called either a water generator, or a water generator bag. This technique requires some sort of cloth or piece of material, so that you can gather snow into it. Specifically, you’ll gather loose snow.

Now, in an emergency, you could use a scarf or other piece of clothing. What I carry for this purpose – whether for an emergency or if I just want to generate some water, maybe at a lunch stop, is a mosquito head net.

Make sure you carry one that isn’t treated with insecticides, or make sure you’ve washed it well.

This is the method of choice when you have only powdery snow. Here in the forest, that’s pretty much all you’re going to have. You only get windslab, wind-compacted slabby snow, up in the mountains. In the forest, it’s all powder.

Deep snow. That’s what we want. In the video I fill the bag using a shovel but obviously if I didn’t have a shovel, I’d just fill it with my hands (with gloves on).

There’s quite a lot of snow in the bag in the video, and unlike the Finnish marshmallow, there’s no danger of it falling off the stick. Also, unlike the Finnish marshmallow, this type of snow is more readily available. So the water generator bag is something you can do pretty much anywhere, even if there aren’t any trails with compacted snow. You can easily get what you need to do this.

Towards the end of the video I have the water generator bag working really nicely. I have a nice fire, set up like a grill, radiating a good heat. Taking my glove off I can feel it’s really surprisingly hot.

The bag, full of snow, becomes saturated at the bottom, and before too long it’s dripping nicely into my cup.

The bag is suspended from a stick but here is a useful little tip for you: If you find a stick cutting down into the snow, pop another one across, at right angles where the main stick is cutting into the snow. This spreads the load and stops the stick cutting through.

The cord on the bag is not tied off with anything special, just an overhand knot at the top to suspend it at the right height. And that’s it.

I have a taste of this water and compare. It’s really rather good. Really refreshing, cool. It’s still a little bit smoky, but not as smoky as the water from the Finnish marshmallow.

It provides a really refreshing drink.

So there you have it, two simple, straightforward methods for generating water in a frozen environment.

The main thing you need is the ability to light fire in the northern forests.

Northern Forest Firelighting Fundamentals: Bringing It All Together

Choosing And Using A Snowshovel For Winter Camping And Travel

14 thoughts on “How To Generate Water In The Frozen North”