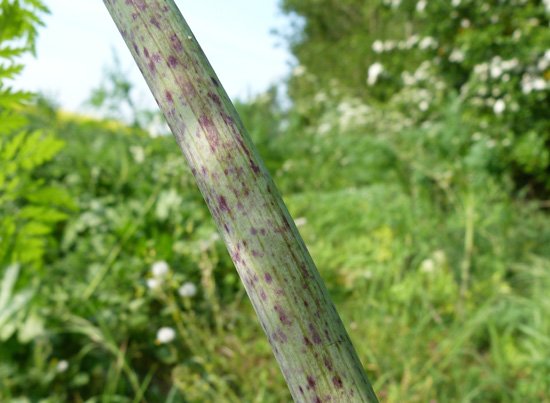 I have known Ian Lawson for quite a few years now – I hired Ian onto the team of outdoor staff at Woodlore Ltd, where he has led Introduction to Bushcraft, Fundamental Bushcraft, and Campcraft courses. He is a skilled and capable woodsman, with a natural affinity for axework and carving. In addition to his professional involvement in the teaching of bushcraft, Ian owns and runs a tree surgery business in Cambridgeshire. While studying edible wild plants, Ian has been fascinated by the similar deadly poisonous species and this is reflected in his first guest article for my blog, below.

Please note this article describes a highly poisonous plant, which is potentially lethal if consumed

Learning which plants and fungi can provide us with a meal in the wilderness is a most empowering exercise. The ability to go out and make shelter and find water allows us to survive for a period measured in days. The ability to find sustenance from the land is truly the difference between survival and living in wild places in some comfort, for an extended period of time.

In learning about edible plants, I have come to find that my attention has been concentrated more towards those plants which should not be eaten. In fact poisonous plants and fungi have fascinated me. This is not as useless an interest as it might first appear. I firmly believe that to know about wild foods you must also know what not to eat; not least because there are only a few deadly poisonous plants in Britain and Europe that can be confused for edible plants, whereas there are many edible species.

I also believe that you should get to know the enemy in as much detail as possible. If you know the ways in which plants can affect you, poisoning can be diagnosed earlier in others as well as in ourselves.

Foraging has quickly become a fashionable pastime, which makes for good TV but, all too often, poor plant education. In teaching others about wild foods you should never neglect to tell them about the other similar plants – often in the same family – for which they can be confused. A plant which I have seen on television being shown as edible is cow parsley, Anthriscus sylvestris.

Cow parsley belongs to a family of plants called Apiaceae, more commonly known as the carrot family. There are many plants in this family with which you will be familiar – plants such as coriander, parsnip, parsley and, of course, carrots. The carrot family also includes edible wild plants such as Pignut, Conopodium majus. This family, however, contains one of the most notoriously toxic plants – Hemlock, Conium maculatum. Hemlock is a biennial plant, growing to between 1.5 and 2.5m (4-7ft) in height. It has large, lacy leaves and purple spots and streaks on the stems. It is found, naturalised, in many parts of the world. It is usually found on poorly drained soils, roadsides, field edges and waste areas.

Hemlock contains toxic alkaloids. If consumed, these alkaloids can be fatal to humans as well as all classes of livestock. The main toxin is called coniine. It is a compound which is very similar to nicotine. Coniine is a neurotoxin. Poisoning usually results in death by respiratory failure caused by ascending muscular paralysis. The lethal dose, for an adult, is about 100mg. This equates to 6-8 leaves. The toxins are in higher concentrations in the seeds and roots. The roots can be confused with edible roots in the same family such as parsnips.

Death of victims has been prevented by induced coma and artificial ventilation until the effects have worn off 48-72 hours later. An early diagnosis is vital. Some of the early symptoms are gastritis and central nervous system stimulation (tremor, ataxia and seizures). You could also observe increased heart rate, salivation, dilated pupils and profuse sweating.

When we go out for a walk we might not think twice about walking through an inviting glade of cow parsley. Knowing that its relatives have dark secrets opens our eyes to the deceptive subtleties of plants and foraging for wild foods. While knowing which plants can sustain us is certainly empowering, knowing the harm some plants can cause us gives us a more humbled position in nature.

This article is meant only as a guide. It is not a complete treatment of all plants that may also be present in the habitat where you find the above-mentioned plants. If you want to learn more about plant identification you should invest in some good field guides. The safest way to learn about wild plants is for someone who already has the knowledge to show you in person. Any idenification of poisonous plants or edible wild plants you do on your own is at your own risk.