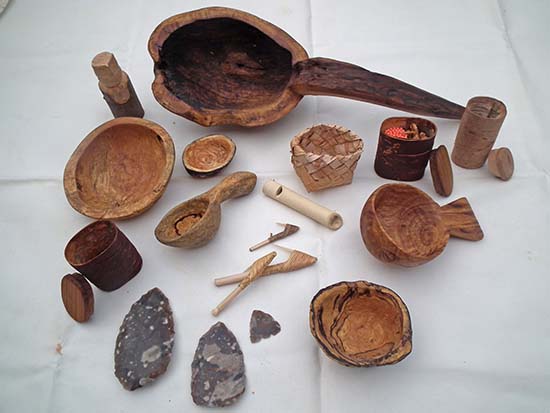 I first met Paul Nicholls as a student on a bushcraft course I was running a few years back. I was impressed by his enthusiasm and I clearly remember conversations I had with Paul about fishing techniques. He is a keen angler, knows much more about modern fishing techniques than I do and is very generous with his knowledge.

Paul contacted me via my blog earlier in the year. He sent me some pictures of carving and various other craft projects he had been working on. I was impressed! He had made some really nice objects. It’s great to see the evidence of his continued and growing enthusiasm for bushcraft that started on his course a few years back.

Paul then sent me a story written by his wife, Lisa, about her experiences as Paul travelled on his journey of bushcraft discovery. I read the story and it certainly struck a chord with me. I really enjoyed Lisa’s writing and asked if I could share it with readers of my blog. They graciously agreed and Lisa’s story is published below.

When Paul sent me Lisa’s story, he described it as “bushcraft from the other perspective.” I think many will empathise…

“You’d love it babe!” my husband stated with a knowing nod, as I shot him a look that said…… Really?????

“ …Just you and me and the dog…..under the skies, in the woods…” he rattled on. Gone from the here and now, he had that familiar faraway look in his bright little eyes.

I was thinking…….Hmm, Wolves?.. Spiders?…Rats? ….It’s a good job we live in England really, as I could not, would not, cope with snakes or deadly creatures as seen in some parts of the world.

This is the state of my marriage at the moment. And it all started two years ago when I bought my husband Paul a week long Fundamental Bushcraft course for his 30th birthday, with Ray Mears’ Woodlore Company. I remember packing him off and worrying that he wouldn’t like it, that he would miss me too much or it would not be what he expected and he would be disappointed. But at nearly £700 for one week, my attitude was; you had better bloody like it!

My worries were, of course, unfounded. Quite the opposite in fact. On his return, with a noticeably thinner frame, blackened face and the stench of wood smoke clinging to everything, he literally chattered for hours and hours about how great it was, how all the activities were amazing, how the instructors were Gods in human guise, in particular, one Paul Kirtley and how ‘This was IT ! This is what I want to do! I was meant to do this!’ as a recurring theme of his conversation. (I say conversation but I don’t believe I actually got a word in!) Eventually I managed to get the stinking clothes off his back and into the wash and he slept, albeit fitfully, and only after encountering my disdain when he dared to consider whether he would be more comfortable on the floor.

From that day forward our life changed. I was shown various plants that he had eaten and/or drunk. He did eventually go back to drinking tea with proper milk although he protested for some time that it ‘tasted funny’ and he took to collecting more of the plant matter and made tea (green water) which he claimed was ‘so much more refreshing!’ Now I like a herbal beverage as much as anyone but some of his concoctions were so truly terrible that they really only would be consumed if the alternative was death itself.

Even the dog got roped in, being subjected to slower walks, much to his chagrin. Now we stop frequently, not to smell the flowers, but to identify them, take photographs or cuttings and scrutinise them. We take them back and look them up in the library. Pre-Ray, this was our living room.

When he first got back, he proudly produced a lump of wood with a thick end and a thin end. “This is my spoon!” he declared. I swear his eyes misted over. “I just need to finish it”

Two years later and we have about 50 spoons, all different styles, sizes and wood. Anyone that sees them wants one. They are that good. He has gradually started to introduce power tools into his endeavours but initially this took some time as he doubted the integrity of their use when producing objects as hand-carved. We often discuss whether early wood carvers would have used them had they been available. I think they would have, they were primitive, not stupid! The tools have certainly reduced the hours that go into this work and the results are not compromised at all. Now we just have to get over the hurdle of parting with them in exchange for money. This issue is ongoing as he becomes so attached to something once it is completed that he doesn’t want to let it go. I guess a little part of him is in every piece. Family and friends have a queue forming for gifted spoons.

We have always enjoyed camping and we have been guilty of buying all sorts of furniture and general stuff to adorn our tent and surrounding claimed area. Of course in the world of Bushcraft this is all completely unnecessary and minimal is the mantra. So now we have pot hangers, clothes dryers, shelves and tent pegs all made from branches collected from nearby woods. At the end of the trip they can all be chucked or burnt.

He has read and practised and failed and tried and tried again until he has succeeded in making fire by friction.

Pre-Ray, the house was filled with the most appalling blood-curdling squeals of wood being twisted into wood and a distinct smell of scorching…but no fire.

Post-Ray, the house is filled with the most appalling blood-curdling squeals of wood being twisted into wood and the distinct smell of burning! Yay! There is fire!

He still gets the most enormous buzz from making fire by friction and has demonstrated this skill at local country fairs and scout groups. I have to say there is something very primal about seeing fire appear in this way and it never fails to impress anyone who witnesses it. Watching the amazement grow on people’s faces and hearing the applause generated for him is really cool.

He has always liked making fires, for burning rubbish or barbeques etc. Now, the making of fire is exclusively his domain and has to be done ‘properly’ i.e.: The Ray Way. Even though we live in a residential area, he will make a fire at any given opportunity and will sit in a cross-legged, supervisory position for hours on end whilst carrying out allegedly extremely important poking duties. With the dog by his side and generally a beer in his hand he is in his absolute element here. One happy bunny.

One of the nicest aspects of this whole Bushcraft thing has been the people he has met along the way. Some have become good friends and offer an astounding variety of talents and skills that are shared and discussed.

He met Sue on his first course. Sue is an outstanding cook whose philosophy is whatever you can cook inside can be cooked outside. And she generally can and does. Sue could take you to the woods, chop down a tree, make a shelter and rustle up the most luscious meal. She will drink you under the table with one hand and bake a cake with the other and then go home and mind the kids. Sue now works for Ray’s Woodlore Company instructing and supporting the courses offered. She has been an amazing source of support for Paul, as he has to her. She is great. A lifelong friend made.

Henry, (dubbed ‘Bear Henry’) he also met on the first course. Henry shares Paul’s passion for all things Bushcraft and they often go off into the woods for hours on end or play with power tools in the back garden. Henry is a legend. A very, very clever chap, he has also become a lifelong buddy. Just the other day they were overheard having an animated discussion on the benefits and uses of ponchos. See: How to Make a Folding Bucksaw for evidence of Henry’s talent.

Paul’s desire to ‘Do This!’, led to a job interview with Woodlore. It was a hard, cold, week-long interview and although he put his heart and soul into it, he was unsuccessful. One highlight however, was meeting Ray, who Paul said was a straight-talking, consummate professional, likening his craft to ‘surgical precision’. This is a serious business.

Another plus was the presence of Paul Kirtley (we are not worthy!) who can be blamed or credited, depending on your view, for all the wood shavings ingrained in my carpet.

Along with spoon-making and general woodcraft-y activities, Paul has tried chain-saw carving at which he was also very good. He really seems to have a bit of a creative side when it comes to wood and would appear to be a natural born Bodger. He has done volunteer work at a few local country parks and through this has learnt a lot about all the associated crafts and work that goes on so that the general public can enjoy such places. He finds this very satisfying and has made some good mates and gained some useful links and contacts.

Paul attended a further Camp Craft course last year at Woodlore and he and Henry went to learn Flint-Knapping with John Lord. He has steered clear of recognised college courses as he is not an academic type and worries that the expense would outweigh the chances of getting a related job at the end of it. As with most country crafts there is little money to be made and no immediate or future opportunities.

A builder by trade, he obviously has an intrinsic need to make and/or build things and it is a shame that he cannot pursue his passion and make a decent living from it. Though he lives in hope, ever optimistic that someone will say ‘Hey Paul, come and camp in my woods and I will pay you loads of money to do it!’

In the meantime, Sue and Henry still come to play frequently and he continues to carve and saw and chop and burn and create beautiful things. He has found some nearby woods where he has been given permission to camp and take wood for carving as the landowner was so impressed with his work and general attitude, so this time next year I reckon we should have about a million spoons.

We have never been happier.

Thanks to all who have made it so, you know who you are…

35 thoughts on “Surviving Bushcraft: The Other Perspective…”