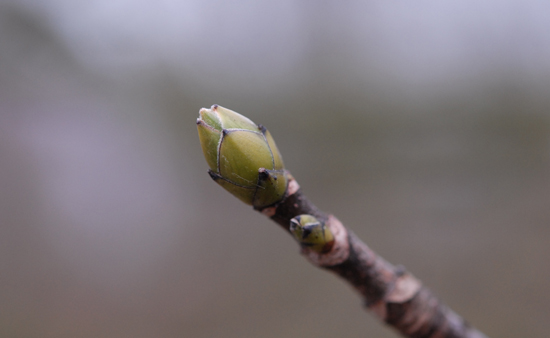 When the woods are bare of leaves, you have to look to other features for tree identification.

I love roaming the woods in late winter and early spring and I’d encourage anyone who loves the outdoors to do the same.  It’s a great time of year to be out.  I’ve noticed, however, that without leaves to refer to, people often find it hard to identify deciduous trees in the winter.

For those of us who have an interest in bushcraft or survival skills, we need to be able to identify resources all year round.  Bark is an obvious feature to look at but in most cases, bark shows more variety and is harder to differentiate than the leaves of different species.

Buds are often associated with spring, whereas they lie dormant all winter, waiting for spring.  So they are present throughout the time we need them to help us identify the tree.

This article provides some key identifying features in the form of bark and buds to help you recognise 12 common European deciduous trees.  I’ve included trees with wide geographical ranges and I have consciously limited the article to a dozen distinct species so as not to provide information overload. The Sycamore is commonly found in the forests, woods and field boundaries of western Europe and eastwards across to the Crimea and Caucasus region.  Sycamore is widely naturalised outside of this native range.   Some in Britain and Northwestern Europe consider it an insidious weed.

The bark of young Sycamore trees is usually smooth and silvery-grey but sometimes brown.  As the tree ages, the bark develops cracks, later having large peeling scales scales of 10-20cm by 5-10cm (4-8 x 2-4 in).

Sycamore’s buds are arranged in opposite pairs.  They are egg-shaped with a pointed end, green in colour and the tips of the bud scales are brown, 0.5-1cm (0.2-0.4 in). Seen frequently all over Europe and east to the Caucasus, Ash is a common tree.  Ash can be found growing in forests, in hedges and on open hillsides.  Indeed, Ash is often found at higher altitudes than most other large broadleaved trees.  When Ash grows amongst other broadleaved trees it is often the tallest tree in the forest.

The buds of Ash are arranged in opposite pairs, rounded except for the termial buds (the buds at the end of shoots and branches) which are more cone shaped.  The key identifying feature of the buds of F. excelsior is that they are black or very dark, looking sooty.  Also note how the ends of shoots curve upwards.  You can spot this from a long way off, before you even see what colour the buds are.

Ash bark is smooth grey or a pale grey-brown in young trees.  In older trees the bark becomes fissured into interwoven ridges and can resemble the bark of Oak (see below). Alders are a common riverside tree and are often associated with water.  They can be found alongside streams and in areas that flood (‘alder carrs’).  Alders also grow in damper spots where water is not apparent on the surface.  The Alder’s native range is throughout Britain, mainland Europe, extending south to north Africa and east to the Caucasus and northern Iran.

Alder buds are often mauve in colour and oblong or ‘club-shaped’ with a length of around 7mm (0.3 in), on a short grey, scaly stalk.

The bark  of Alder is purplish brown in young trees, darkening with age to grey-brown.  In older trees fissures appear and the bark becomes cracked, creating small vertical plates in old trees. Silver Birch is found in forests, on sandy heaths, up on open hillsides and down in mountain valleys.  It occurs all over Europe and into northern Asia.

The distinctive silvery white colour of the bark of Silver Birch is caused by the chemical betulin.  In older trees the bark remains very silvery white in the upper section of the tree, but lower down develops black diamond shapes.  Eventually the lower trunk develops thick, corky and fissures with dark grey-brown to black knobby plates and ridges.  In young trees and, shoots of more mature trees, the bark is a shiny red-brown at first.

The buds of Silver Birch are small, 4-5mm (0.2 in), and egg-shaped.  But in the case of Silver Birch you hardly need look at the buds – the rest of the tree is so recognisable. Hazel is frequently found in hedges and under the canopy of larger trees in woodlands right across Europe.  It typically grows as a small tree or a large bush, and its growth often reflects centuries of coppicing.

Hazel bark starts a light grey-brown, often with a bit of a sheen to it.  The bark can be peeling in younger shoots but the peelings are quite fragile compared to the peelings of birch.  Fissures can appear in medium sized growths but larger ‘trunks’ tend to have smooth grey-brown bark.

Hazel buds are short, blunt with green-red scales.  The shoots are roughly hairy and quite distinctive. The bark and buds of Hornbeam are similar to those of beech (see below) but Hornbeam doesn’t tend to grow into as large a tree. Hornbeam often grows alongside beech, but is better adapted to heavy, clay based soils.  Hence, Hornbeam does well in parts of southeast England. Further afield, it grows across Europe and as far as Asia Minor.

The bark of Hornbeam is a silver to dark grey and generally smooth beech-like.  Some people say it reminds them of the skin of elephants.

Hornbeam’s buds are 4-7mm (0.2 – 0.3 in) long, green-brown,  sharp pointed and this latter feature particularly gives them some resemblance to the shape of beech buds (see below).  But they are a different colour and while Hornbeam produces catkins in early spring, Beech doesn’t. Beech forms pure stands or is part of mixed woodlands right across Europe as far as the Ukraine.

The bark of Beech starts smooth and silvery grey.  The bark only becomes a bit rougher in old trees, rarely becoming scaly and platy – certainly nothing as textured as mature Sycamore, Ash or Oak.

Beech buds have a long, thin and quite elegant spindle-shaped.  1-2cm (0.4-0.8 in) in length, the buds are sharp pointed and have a coppery-brown colour. Widespread and common, the English Oak is the dominant large broad-leafed tree across much of Britain.  Despite its name, however, English Oak also grows throughout Europe, as far east as the Caucasus.  Oak often forms stands of pure forest.

The bark of young trees is smooth and grey-green.  As the tree ages its bark develops more and more ridges and furrows, often cross-fissured into rectangular and hexagonal shapes.

It can be difficult to tell the difference between English Oak, and Sessile Oak, Quercus petraea.  If there are any dead leaves reamining, this can help – the leaf stalks of Q. robur are short and the leaf-lobes deeper, whereas for Q. petraea, the leaf stalks are longer.  NB this is the opposite relationship to the stalks of the acorns – Q. robur’s fruit is on a long stalk or ‘peduncle’, whereas Q. petraea’s is on very short stalks or none (‘sessile’).

Willows can be confusing.  There are 18 species native to the UK and over 400 species of Willow worldwide.  And there are dozens of hybrids.  One of the common European willows that is relatively easy to recognise is the Goat Willow and therefore a good place to start with learning to recognise willows.  It is widespread and grows throughout Europe, often near to water.  Goat Willow is also known as Great Sallow or Pussy Willow.

The bark of Goat willow is pale grey.  To begin with the bark is banded with small diamond-shaped pits.  Later the bark develops shallow, criss-cross ridges and can later develop orange fissures.  Goat Willow’s buds are rounded and quite a shiny red or chestnut brown.  They have only one scale and around 4mm (0.2 in) long. Elder is very common and is found in hedgerows and woodland understorey.  It is widely distributed throughout Europe, north Africa and western Asia.  It usually forms a shrub but trees to 10m (33ft) have been recorded.  It likes damp (rather than wet) places and especially likes nitrogen-rich soil.  Some people consider Elder a weed.  Even Richard Mabey describes Elder as a ‘mangy, short-lived, opportunist and foul-smelling shrub’.

Elder’s bark is a beige-grey.  It is pretty unmistakable for anything else.  The young shoots often have raised ‘warts’ while the older growth develops very rugged, corky ridges and furrows.

The buds on Elder are quite fun – they look like miniature pineapples.  They have spiky scales and are purple in colour (a bit like red cabbage).  They are arranged in opposite pairs and about 3mm (0.1 in) long. Rowan is a very common and widespread small tree of woodlands, open hillsides and mountains.  In the right woodland conditions it can grow up to 20m (65ft) or so.  It grows throughout Europe, east to the Caucasus and south into North Africa as far as the Atlas Mountains.  Rowan is often called Mountain Ash, presumably because it is one of the last deciduous trees towards the treeline.  It isn’t related to family of Ash, F. Excelsior, although it has superficially similar compound leaves.

Rowan’s bark is grey or silvery grey.  It  is often very smooth and can be shiny.  On old trees the bark is duller, grey-brown can develop developing scaly ridges.

The buds of Rowan are pretty unremarkable.  They are egg shaped with a bit of a cone-shaped tip.  They tend to be grey with a hint of purple, with dense white hairs which are often brown at the tip.  The buds grow to 1-1.7cm (04.-0.7 in). In young or small Wild Cherry trees the bark ranges from greyish-pink to purplish-red and is typically shiny.  In more mature trees the bark is purplish grey with prominent horizontal light-brown bands or lenticels.  The bark can peel horizontal strips of bark (a bit like birches).

The buds are reminiscent of English Oak, Quercus robur.  They are egg-shaped and bluntly pointed, dark orangey-brown, and up to 5mm (0.2in) long.  Only the flower buds are clustered and these are not necessarily at the end of shoots or branches.

If you take the time observe the flowers, fruit, seeds, bark and buds of a tree, you will not only be much better at identifying trees year-round, you learn about the tree’s full annual cycle. This study will give you a much greater insight into how all the seasons are connected and how for the tree, they flow from one into another.

An 80s Revival: Surviving with the Dartmoor Knife