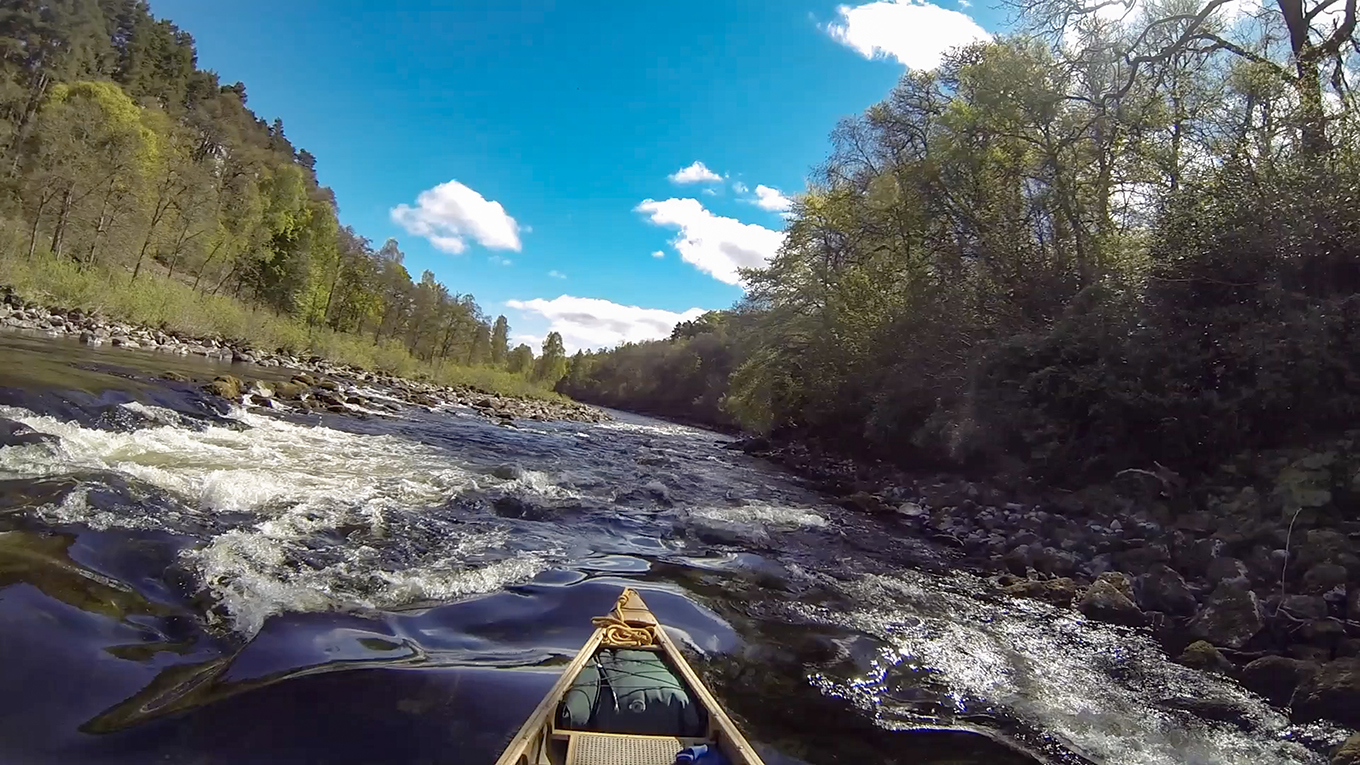 Canoeing the River Tay in its entirety had been on my trip list for a while. Previously I’d paddled sections of the river as day trips but never the whole river. Having been impressed by the qualities of the sections of the river I’d seen, I was keen to canoe the river from start to finish in a single multi-day trip.

The Tay flows into the sea on the east coast of Scotland, via the Tay estuary, or Firth of Tay. This tidal section is lenghty (to paddle the whole section as the tide is going out) and contains fast moving water but under the right conditions is navigable by canoe if you know what you are doing.

The River Tay proper starts at the outflow of Loch Tay at Kenmore and flows first east then south to Perth, where the river than becomes tidal. There are a number of tributaries flowing into Loch Tay, however, and the headwaters of the Tay system as a whole are generally considered to be on the flanks of Ben Lui.

I wanted to start our journey as far upstream as practical. We settled on putting onto the River Fillan near the village of Crianlarich. You may have heard of this place as it is on the route of the West Highland Way as well as the point at which two railway lines converge. One rail route serves Fort William, the other Oban.

So, this is all quite far west. Indeed, Ben Lui is only 25 miles from the west coast. Starting at Crianlarich, then, our trip canoeing the Tay to this extent, meant we would be crossing a good chunk the lower Scottish highlands and ending up on the east coast. Indeed, the River Tay is Scotland’s longest river. The planned trip, then, would take us the best part of a week, with the intention of including the estuary section as far as Broughty Ferry.

Watch an account of the trip in the video below…

There is a satisfaction that comes from planning and executing a self contained, self-propelled journey. It’s a satisfaction independent of the details of the journey in question. For a trip to be memorable after the fact, though, it generally needs to have contained some challenges.

Even though we were early in the season, we had fine, sunny weather, which wasn’t entirely expected. The prevailing wind in the UK is generally westerly but on this trip we had and easterly wind, which was was against us as we crossed from west to east. Also, it had been a poor winter for snow, so there wasn’t much water in some of the tributaries. This combination of low water and headwind slowed us down, particularly in the early stages of the trip.

Despite the challenges, there were some wonderful wild camps, along the waterways and by the side of lochs, one of which we would never have witnessed had we stuck to our original plan. You can see more details of our camps in the video above.

For this trip I invited Paul “Spoons” Nicholls to join me and the intention for him was for this trip to increase his experience of multi-day canoe tripping. Spoons had canoed the River Spey with Ray Goodwin and me but the Tay was going to be a more varied, and in some ways more difficult journey, with us having to apply a wider range of canoe journeying techniques, including lining and portaging as well as paddling.

There were small streams up to big bouncy rapids to negotiate, calm river sections of crystal clear water as well as at least one large lake, Loch Tay. This canoe trip down the River Tay exceeded our expectations, providing a magical mix of canoeing, nature and wild camping, with ample opportunity to apply everyday bushcraft techniques along the way.

I hope you enjoy the virtual experience of joining us on the trip, canoeing the River Tay and wild camping via the video embedded above. I’d love to know what you think in the comments below. I read every comment on my blog and, as always, replies are from me personally.

Enter A Virtuous Circle: Take Your Bushcraft Skills On An Adventure

Switching Out Of An Expedition Mindset: Two Days Of Paddling At The English Canoe Symposium