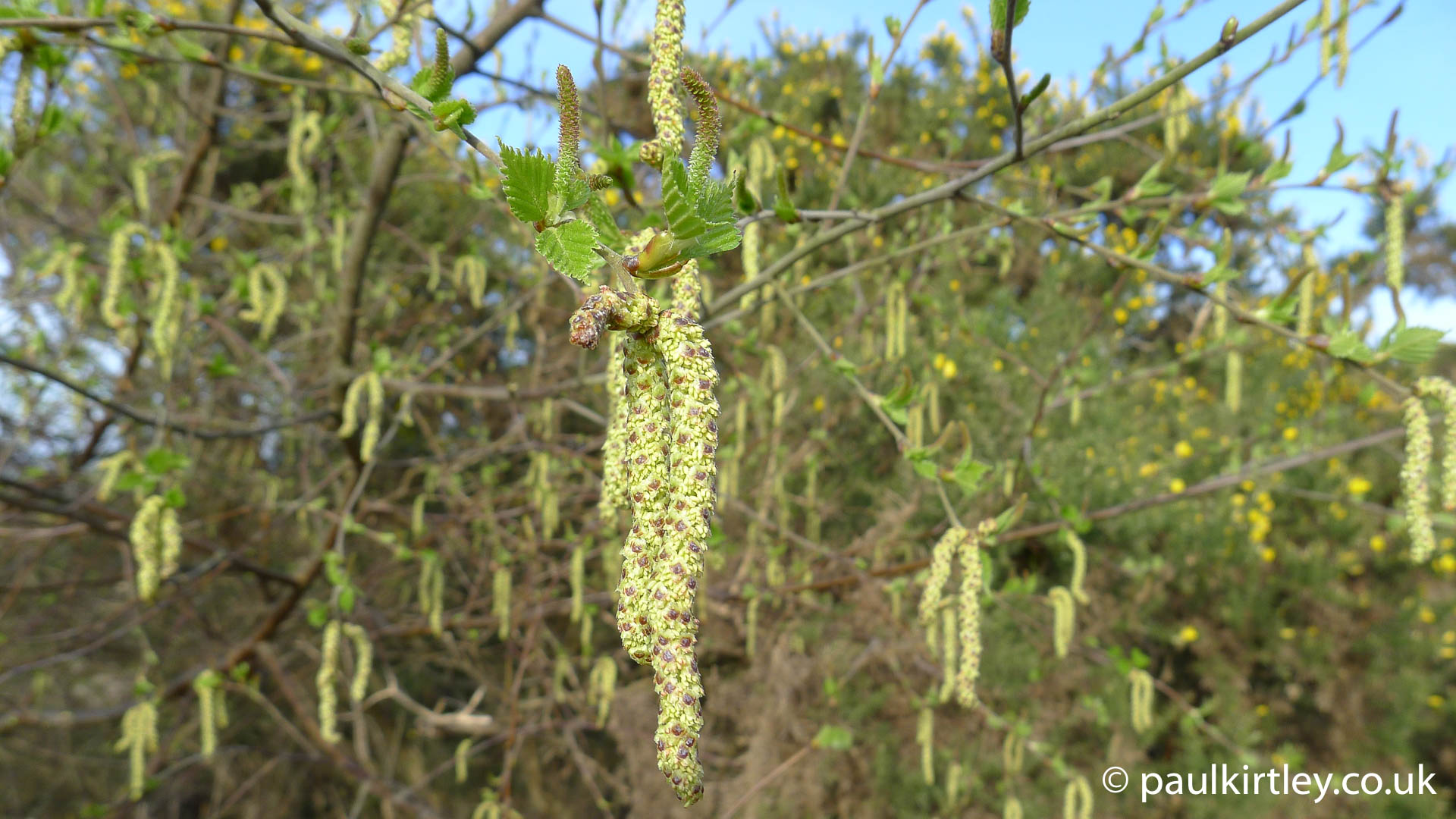 The Betulaceae is a family of trees that derives its name from the genus Betula, more commonly known as the birches, which forms part of the family. The common and widespread Eurasian birch species that many people know is silver birch, Betula pendula, also known as European white birch. Downy birch, the UK’s other native birch, is Betula pubescens.

The male flowers of the Betulaceae are borne in long catkins, which once extended, become very noticeable. The female flowers are held on the same tree. Both of these flowers are very different to the archetypal cherry blossom. Moreover, the flowers of the Betulaceae often show themselves in late winter, yet often go unnoticed. Once you notice you the catkins, though, you notice the similarity between a number of common species. Further, once you have a closer look and compare the differences, these species are easy to tell apart.

Silver birch in unlikely to need any great introduction or description here. It is ubiquitous in many parts of northern Eurasia, from the UK eastwards. It’s easy to spot in the landscape due to its silvery-white bark and pendulous shoots.

This tree is one of the outdoors-person’s true friends, providing many resources. Even so, many who are familiar with the tree perhaps have not taken much time to notice the flowers of this common species in the spring. I would recommend taking a look. It will help with understanding and recognising not only birches but also their cousins, including alders and hazels.

Alders form the genus Alnus and also form part of the family Betulaceae. Alders are trees that impose themselves on your consciousness much less stridently than birches do. They are less showy and tend to congregate down in damp hollows, particularly in places boggy mud might ooze over the tops of your boots. So, maybe you don’t tend to tramp there as much as other places.

Alders are often found on the edges of streams and rivers and always like their roots in damp ground. As such, alders are a good water-indicating genus in the northern temperate zones. Dead standing wood from alder also makes a very decent bow-drill spindle and hearth board.

In leaf, Alnus glutinosa is easy to recognise with its shiny racquet-shaped leaf. In winter, its buds are a highly distinctive mauve colour. Before they expand, the catkins are also tinged with purple. Once extended they also have shades of yellow in between the purples.

Alders are the only broadleaved deciduous trees that form woody cones. You can see these forming, green, on trees early in the year but you’ll also see dark brown, almost black, spent cones sticking around into the following year, still on the tree or having got caught up on their fall to the ground.

Bring all the above features together and alders are not only fascinating to look at up close but also easy to differentiate from other species.

Hazels were once treated as part of a separate family but latterly were joined into the enlarged birch family, Betulaceae. Certainly there are some similar traits, in particular the catkins. Indeed, if I were to wager which trees the average person would most associate with catkins in the spring, my money would be on hazels.

Again, hazel catkins hold the male flowers. Much smaller, but even more fascinating are the female flowers of common hazel. They put forth small but brightly pink structures that give the impression of some kind of alien tentacles. Combined with the bud from which these structures protrude, the overall impression resembles a funky hermit crab.

Hazel shoots are often coarsely hairy, with short stubbly hairs. The terminal buds tend to be fat, with noticeable bud scales and red-green colourations reminiscent of some popular apple cultivars.

Despite these members of the Betulaceae having catkins in common, and while these flower stuctures provide recognisable family traits, it is not difficult to tell these species apart. Indeed we can use the catkins, buds and other local detail to help us pinpoint which species we are looking at.

Remember these identification features are going to be present before the leaves emerge and so help us with identifying species in the winter and early spring, when the easiest ID features (the leaves) are absent. I’m confident that in drawing your attention to the features highlighted above, you will be better equipped to identify these species of trees.

In the comments section below, let me know what was the stand-out piece of information you took away from reading this article.

If you’d like to learn more about the identification of trees and plants that are useful for bushcraft and survival, you can request information on my Tree and Plant Identification Masterclass online course by clicking here.

Spring Plants And Some Tracking Fun

PK Podcast 035: Anna Lewington On Adventures In Ethnobotany And The Bounty Of Birches